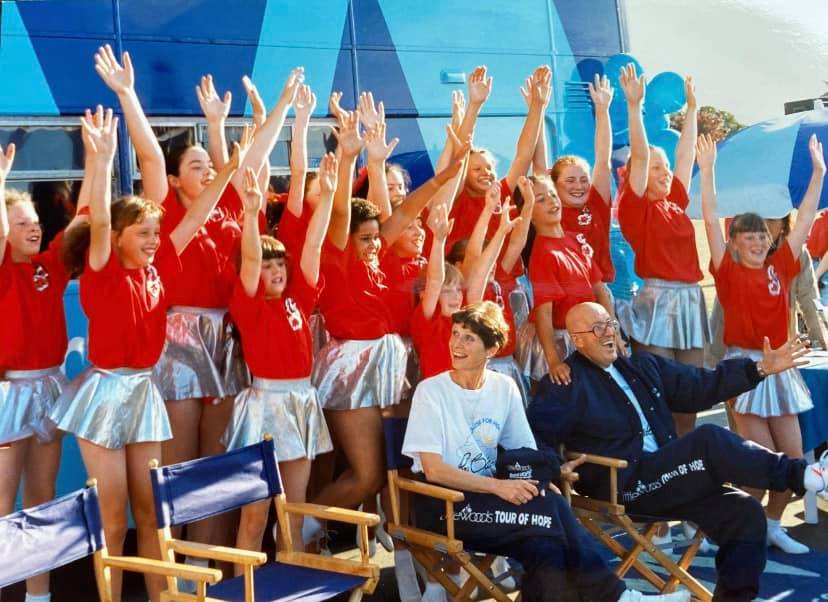 As a fan of Record Breakers herself, dance school director Sue Cook immediately agreed to organise a performance with her students. 26 years after performing for Roy and Fiona Castle, the dance school joined us for our Christmas Tapathon.

Sue recalls her memories of that very special day in 1994. “It all started with a phone call asking if we (the Geraldine Lamb Dance School) could produce a group of dancers to perform for Roy on Plymouth Hoe during his Tour of Hope. It was very short notice, but yes, of course we could! We had just three special rehearsals to get it together ready for the performance for Roy and Fiona.

We arrived on Plymouth Hoe very early that morning. The idea was to run the dance through a couple of times, but word came through that the train was in the station and Roy was feeling as good as could be expected, so we started early. Our local film crew were there, and when Roy and Fiona arrived the press photographers were with them.

I had choreographed the dance to ‘One’ from the musical A Chorus Line. Our dancers did an amazing job! My daughter, Lara, accompanied us at just four and a half years of age.

As the Tour of Hope was a national appeal to raise funds for the world’s first research centre dedicated to lung cancer, cheques were presented from local businesses. We had also asked our dancers if they could ask friends and family to donate. Money was collected when we arrived on the Hoe – we had thought that the money donated would fit in an envelope, but the students had made collections in their schools and we ended up with a carrier bag of money! Lara presented it to Roy and even sat on his lap.

Roy was brilliant, he spoke to our students and took lots of photographs with everyone.

One group of students told me that they were late arriving back at school – when they explained they had just danced for Roy Castle their teacher didn’t believe them!

Once in a lifetime experience

I had always been a big fan of Roy Castle as a child, I remember watching him on Record Breakers. My dad had watched him perform live and used to tell me how exceptionally talented he was, so I was very proud to be part of this. Around 9 years later my dad also died of lung cancer.

As a dance teacher, we sometimes get to do some pretty special things, this is one of mine. I’ll cherish the memory of being a part of this forever.

We are proud to have taken part in this year’s Christmas Tapathon, 26 years after that special day with Roy and Fiona on Plymouth Hoe.

We were able to rehearse (socially distanced) together a couple of times before the main event. When the tapathon day came around, we performed the routine together on Zoom while watching the live stream on Facebook – the wonders of technology! Some of our students had a hockey match at the same time, so they took time out to perform the routine on the hockey pitch alongside the livestream – it was a lot of fun!”