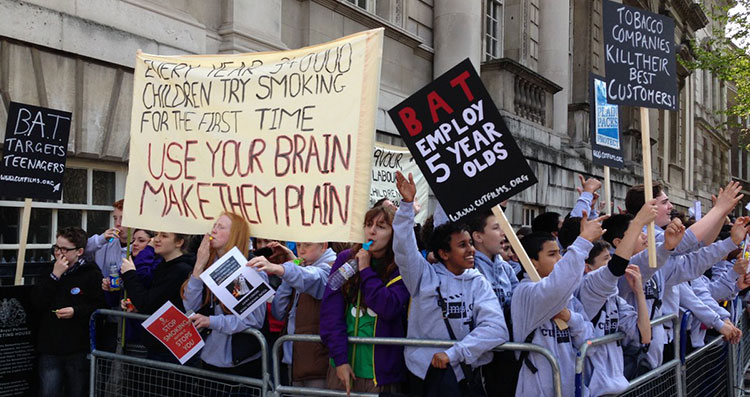 In total, the cost of smoking in England is estimated to be at least £12.9bn a year. This includes NHS, social care and lost productivity costs.

The figures are intended to urge the Government to renew its efforts to drive down smoking rates; a Government strategy on smoking is now a year overdue. However, Paula Chadwick, Chief Executive of Roy Castle Lung Cancer Foundation, is concerned about the potential backlash this could have on lung cancer patients:

“Smoking is the primary cause of lung cancer. We know that, we aren’t trying to disguise that fact. The problem is people with lung cancer are therefore vilified, made to feel like they deserved this awful disease because they choose to smoke – even those who have never smoked a single cigarette in their lives.

“Let’s be honest, the villains of this piece are the tobacco manufacturers and the Government’s inaction on smoking is allowing them to escape unharmed. The same cannot be said for its consumers and we are now worried, at a time where there is so much fear surrounding our over-stretched health and social care system, that lung cancer patients will be ostracized further.”

Katie Cohen understands this more than anyone. Diagnosed with stage IV non-small cell lung cancer adenocarcinoma in January 2015 at the age of 32, she talks about people’s perception of the disease:

“When I tell people I have lung cancer their first reaction is to ask me if I smoked. Not ‘My goodness, that’s awful,’ or ‘Are you ok?’, but ‘Did you smoke’. I know they don’t mean to cause offence but it sends the message that this is my fault. Having lung cancer is hard enough without the added feeling that you brought it on yourself. Even if it was caused by smoking, no-one deserves this.”

40% of regular smokers began smoking before they turned 16 while 8% of 15-year-olds currently smoke. According to a report by The Royal College of Physicians, most smokers do not smoke out of choice but because they are addicted to nicotine. The report concluded that nicotine is a highly addicted substance and that tobacco dependence is at least as serious as addiction to ‘harder’ drugs such as heroin and cocaine.

“Nicotine addiction is vastly underestimated. People think willpower alone is enough to stop. In some cases, it can be but the majority need help and support to quit. As a charity, we have experienced cuts to stop-smoking services first-hand.

“In 1994, we launched the UK’s first smoking cessation service – FagEnds. During that time, we helped half a million people stop smoking as well as educating over 50,000 school children below the age of 10 on the dangers of smoking. We also instigated and successfully campaigned for a smoking ban in public places and in cars with children present. Sadly, last year, funding was cut and Roy Castle Lung Cancer Foundation is no longer able to operate a smoking cessation programme.

“To leave smokers with little or no help to quit will only make this growing issue worse.”