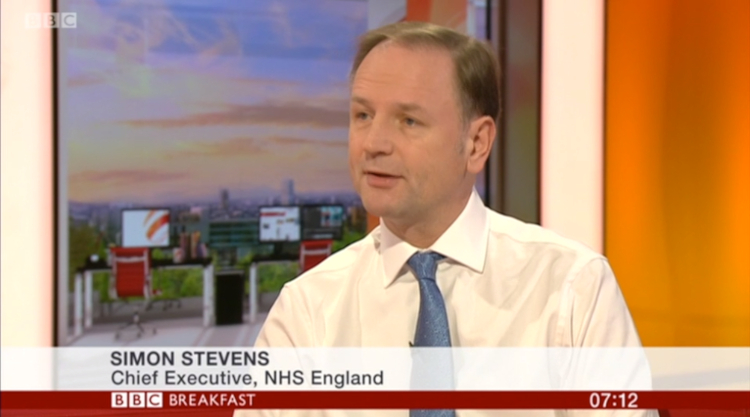 The NHS has today published its 10-year plan, with an aim to save up to half a million lives.

One of the ways it will look to achieve this is by focusing on early diagnosis, including the early detection of lung cancer, where it promises to ‘invest in earlier detection and better treatment of respiratory conditions to prevent 80,000 hospital admissions’.

Making reference to the lung health check programme in Manchester, chief executive of NHS England, Simon Stevens, confirmed similar projects will be rolled out across the UK.

Speaking on BBC Breakfast this morning, he said:

Here in Greater Manchester, for example, [there is] a really interesting programme giving people with lung problems early scans and that has detected lung cancer much earlier so when you treat it, the treatment is much more successful, so we’re going to be rolling things like that out across the country.

“We are delighted that the earlier detection of cancer, including lung cancer, is one of the main focuses of the NHS’s long-term plan.

“Cancer survival may be the highest it’s ever been, but lung cancer survival rates lag significantly behind that of other cancers, with just 10% of those diagnosed with the disease living for five years or more.

“Having funded our own lung health check, we have seen first-hand how it saves lives and look forward to further announcements on the roll out soon.”

Bill Simpson was one of the people diagnosed with early stage lung cancer through the charity’s lung health check in Nottingham:

“If I hadn’t had gone for that scan, I could have been dead in a year’s time. The doctor has since said it’s given me 10 more years of my life.

“These mobile scanners should be in every major city, I really believe that. I’ve only seen one in my life and that was the one that saved me!

“That’s the big thing – if they find it, you can be fixed and I think it [a lung health check programme] is a great idea.”