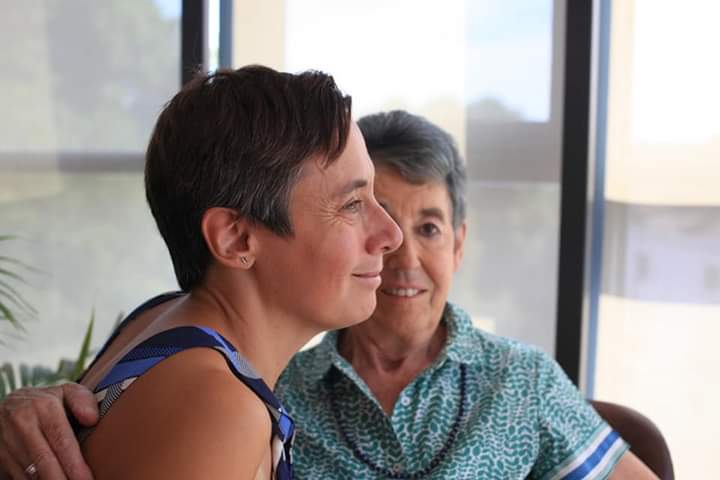 Throughout November last year, Emma Dixon decided to ‘Swim The Distance’ for Roy Castle Lung Cancer Foundation in memory of her mother. Now she is determined once again to raise awareness of the annual campaign.

Emma Dixon, a human rights barrister, is based in north London. When her mother, Kay, was diagnosed with lung cancer, Emma wanted information about what would happen in terms of treatment and healthcare support.

Shortly before her mother died, Emma promised her she would raise funds to help find ways to diagnose the disease earlier.

So, she took part in Roy Castle Lung Cancer Foundation’s annual ‘Swim The Distance’ challenge. Those who enter this event can select from a ‘menu’ of distances to swim, and then choose for themselves where and when to complete the challenge, providing it’s within the course of a month.

A regular swimmer, Emma decided she’d take on the challenge of covering a distance of ten miles; which she did, throughout November.

In icy open waters. Without a wetsuit.

So, what droves her forward, as she cut through the freezing chill?

The memory of her mother, Kay – and Emma’s determination to honour her.

Kay was born on New Year’s Eve 1941, in Somerset. It was wartime and the height of the Blitz, so her family had been evacuated from London to the relative safety of the countryside.

Kay’s own mother, Beryl, was separated and eventually divorced from her husband, Alfred Pottier, so Beryl was left to raise Kay alone. She made a wonderful job of it too; Kay trained and worked as a secretary before meeting Gordon Dixon, the man she was to marry at the age of 20.

The couple had two children; Emma, and her younger brother, Thomas. When the children started school, Kay went back to work, as secretary in the House of Commons to the late Conservative MP Robert Adley.

Kay’s career went from strength to strength, and with her quick intelligence and vast knowledge of current affairs and politics, she soon secured a job at the Department of Education. She went to become the Head of Press and Public Affairs at the London Stock Exchange, a role she filled until she retired in the early 2000s.

After Gordon died in 2007, Kay decided to pursue her dream of going to university; and in 2012, at the age of 70, she graduated with a First-Class degree in History of Art from Birkbeck College (University of London). This was without doubt one of her proudest achievements, although she was far too modest to ever wish to boast about it.

A civilised and cultured woman, Kay loved the cinema, literature and music, especially her annual visits with friends to enjoy the opera at Glyndebourne.

Kay later gained an MA (with Merit) in Garden History from the University of Buckingham, before becoming a volunteer guide at both Tate Modern and Tate Britain. She also volunteered at the Charles Dickens museum. She was still working there when she was diagnosed with late stage lung cancer in 2018. She lived for just another 84 days.

Emma feels the loss of her mother very deeply. She said, “Life is a sadder, greyer place without her. My mum was full of warmth, wit and humour. She was the anchor for me and my three teenaged children who loved her so much.

“It was a terrible shock for my mum – and for all of us – to get this diagnosis.

“My mother wasn’t really one to talk about her feelings, but I think it’s fair to say that she felt extremely anxious. She hated losing her independence and I know she worried about the effects on us, her children and grandchildren. She had always been so fit and healthy. She was determined, independent – and brave.”

Emma and her family felt the impact of her mother’s diagnosis.

Emma became aware of our charity when she needed to know more about her mother’s illness.

She said, “My first real awareness [of the Foundation] was when I was searching online for information about lung cancer following mum’s diagnosis. Your leaflets were always brilliantly informative and clear – and sensitive. The personal stories on your website gave us hope, and the Roy Castle Lung Cancer community made us feel supported at an immensely sad and difficult time when we would otherwise have felt so alone”.

Emma’s own gutsy determination to tackle the ‘Swim The Distance’ challenge quickly attracted media attention in Camden Town, which helped her to raise many thousands of pounds for the charity. She remains involved in supporting the work of the charity and continues to advocate for better awareness and to promote earlier diagnosis of lung cancer.

Like so many of our supporters, Emma is seeking ways to turn sadness and loss into something positive and life-affirming.

As she said in the midst of her swimming sessions last year, “I’ve really enjoying the opportunity to focus on something positive coming out of the terrible grief at the loss of my mum.

“I know she would have been at the poolside cheering me on with a thermos flask of tea and an enormous packet of biscuits! She was always really proud of my swimming endeavours and she was pleased that I chose to do something which was good for my mental health and to de-stress, as well as working hard at my job and raising three kids with my lovely husband James.

“So, my advice to anyone still trying to make up their mind about taking on Swim The Distance is simple: Go for it! And if you don’t like cold water, there are plenty of heated pools. Good luck!”

SWIM THE DISTANCE THIS NOVEMBER