Home / News / I trusted my instinct and it saved my life 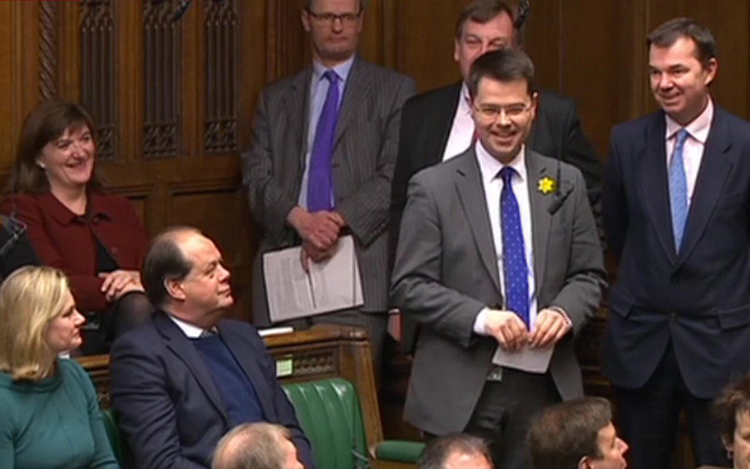 On Wednesday 28th February, James Brokenshire MP returned to the House of Commons for his first Prime Minister’s Questions since having lung cancer surgery.

During PMQs, James spoke of his treatment for lung cancer, highlighting the key role of early diagnosis in improving survival rates and the importance of a “speedily and widely implemented lung health programme”. He ended by asking the Government to undertake actions to reduce stigma and false judgement on people with lung cancer.

The former Northern Ireland secretary was diagnosed with lung cancer in the new year after he coughed up a small amount of blood on a single occasion. Fortunately, due to his own persistence and a good GP, he was diagnosed early and eligible for curative surgery. He is now speaking out about his experience to try and help others have a similar outcome to him:

“Given my age, fitness and that I was a non-smoker, I didn’t fit the mould of a person at high risk of lung cancer, so when I cleared my throat and saw a small blob of blood in my tissue, it’s fair to say such a diagnosis wasn’t at the forefront of my mind. I did however feel that something was wrong and went to my GP straight away.

“I suppose I could have said ‘no, that’s fine, let’s leave it’. Similarly, I could have said ‘do you know what, I’m just too busy – I’ll go later’ but making time for yourself and your health has to be everyone’s number one priority.”
James Brokenshire MP knows the importance of patient advocacy

“My GP was very good in recognising that this was unusual and could see that I was concerned. Whilst he indicated that the symptom I showed could be explained by an infection, he felt that the right thing would be to send me for an x-ray. After the x-ray came back inconclusive, he was the one who said I should go and see a chest consultant – although as a non-cancer referral. Needless to say, I readily agreed.

“I went on to have a CT scan, bronchoscopy and PET scan – I chased up results at every stage – before finally receiving my diagnosis. My GP rang me up and sounded genuinely shocked. Even my consultant said she didn’t expect this.

“Two weeks after receiving my diagnosis, I had surgery to remove the upper lobe of my right lung.

“Reflecting now, I realise how lucky I was. I was lucky that my tumour bled and presented in the way that it did, that it was caught at a very early stage and that it was in a place that made surgery possible. I owe a huge debt of gratitude to my GP for referring me on and I have nothing but praise for my NHS treatment.

“Since my diagnosis, I have learned a lot about lung cancer, most notably the importance of early detection and the role a patient can play in this.

“At any point I suppose I could have said ‘no, that’s fine, let’s leave it’. Similarly, I could have said ‘do you know what, I’m just too busy – I’ll go later’. At the time, I was heavily involved in the Northern Ireland and Brexit negotiations. In fact, there was an important cabinet meeting on the same day as my PET scan but making time for yourself and your health has to be everyone’s number one priority.

“I knew intuitively that something was very wrong and was determined to find out precisely what the problem was. I owed it to my family as much as myself and now I am so relieved I made the choices I did.”

James knows how lucky he was his lung cancer was caught early. He now wants others to have the same chance and is pushing for the implementation of a national lung health check

As James recognises, he is incredibly lucky. His GP realised something was not right and did what he should under NICE guidelines.

Sadly, stories like his though are too few and far between.

We know many patients who visited their GP with symptoms were not referred for further tests, the majority of whom are now living with a late stage diagnosis or have passed away.

We recognise the difficult job GPs are faced with and that many lung cancer symptoms can be explained away as something far less sinister. This brings us back to one of the main points James raised about being your own health advocate.

We want patients to have the knowledge and confidence to question their GP if they feel unhappy with their course of treatment, or lack thereof.

Do not be afraid to ask your GP to refer you. Make sure you fully explain all of your symptoms – regardless of how small or unrelated you think they may be. There are many signs and symptoms of lung cancer, some, like a cough, seem more obvious than others, like clubbing of the fingers. You should also talk about the emotional impact the situation is having on you as well as any family history.

You know your body best. James experienced one symptom, once. It came at a time when he felt perfectly fine and showed no other symptoms yet he said he just ‘sensed’ something was wrong.

If he had waited, if he hadn’t have persisted, if he just wrote it off as one of those things, a one-off, an anomaly, then this would have been a very different story… but one we have heard many, many times before.