This Sunday, Jemma will be taking on the Great North Run in memory of her Mam, Christine, marking the five year anniversary of her death. In that time, a lot has happened including the birth of what would have been Christine’s first and second grandchildren, so now Jemma, along with her sister Adeleand Auntie Evelyn, wanted to shine a light on the cancer which devastated their family:

“Mam had a happy, smiley face and was always known for her love of talking! She was loud. Very, very loud, particularly when she was singing along to her beloved Michael Ball CDs!

She was a primary school teacher for over 30 years. She was born to teach and had an amazing relationship with her pupils and colleagues alike. But she had a strict side too. You definitely didn’t want to get on the wrong side of Mrs. Bainbridge!

Mam’s diagnosis shocked us to the core. At just 56, she was very healthy and very fit. She went for long walks most days. She had a walking app on her phone and would always be so excited if she’d beaten her personal best! She is not someone who you would ever think to get lung cancer – but she did and it took her so, so quickly.

It started with back and shoulder pain. It got so bad that Mam had to retire from full time work. She went to the doctor where she was prescribed pain relief and referred to a physio but it didn’t do any good.

Her health deteriorated. She was spending a lot of time in bed and was unable to go out for her walks. It got to the point where she could barely walk to the bathroom.

Then, one morning in November 2013, she woke feeling really unwell. She was dizzy, one side of her face was drooping and she was struggling to swallow and breathe and so was taken to hospital.”

That was when we found out it was lung cancer, that it was incurable and she didn’t have long.

It was so advanced there were no treatment options available. We were left alone, just waiting for the end. We just couldn’t believe it.

Within 24 hours of diagnosis, Mam lost all movement in one side of her body and could no longer talk. This was particularly devastating. All our lives, we’d heard the sound of her laughter. She was always laughing with us, with dad and her brother and two sisters. And then the laugher stopped.

A few days before she died, we made the decision to move her into a hospice. She actually perked up a little. She wasn’t sleeping as much and even demanded a chocolate by waving her good arm around and pointing to the box. This was a nice moment. We were able to see a final glimpse of the Mam we knew and loved.

They weren’t lying when they said Mam didn’t have long. She died just ten days after she was diagnosed.

How can that happen? From what I’ve learnt following Mam’s diagnosis and death, this isn’t uncommon and yet lung cancer isn’t as well known or talked about as much as other cancers despite killing the most people in the UK!

That’s why we decided to run for Roy Castle Lung Cancer Foundation – to raise awareness for this cause.

We have all missed out on so much. My sister, Leanne, was pregnant when Mam first became unwell. She was so excited. It would have been her first grandchild.

Asher Luke Dawson arrived on 13th February 2014. It was a very emotional day but Asher, as well as his little sister, Abigail Christine Faith Dawson and all the other grandchildren to come, will always know about their wonder grandma and know how special she was.

We’re really excited to do the run and to experience the buzz of the day. Mam would have been really proud of us and I know she’ll be with us all the way… and very excited if we beat our personal best!” 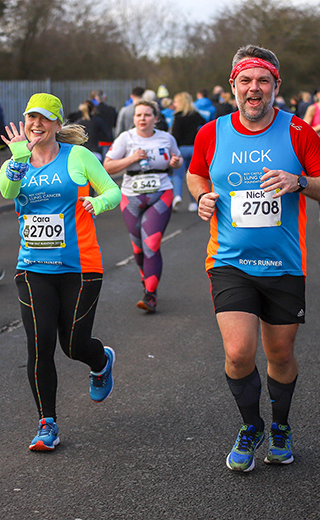