Matthew Hughes-Short will celebrate turning 30 this year by undertaking a gruelling 24-hour challenge in memory of his tenacious, resilient and charismatic dad, Bob, eight years to the day since he sadly passed away.

Matt’s Dad, Robert James Short – Bob – was born in Wimbledon on 20th February 1949 to Tom and Irene Short. He grew up in South London with his two older brothers, Tom and John, and a younger sister, Alison.

As well as working in advertising, Bob was an all-round sportsman, playing rugby to a high standard and coaching multiple rugby teams.

Matt’s life changed on 3rd August 2010 when his dad was diagnosed with lung cancer, aged 61.

Matt recalls: “The only symptom he had experienced was pain in his stomach, in April 2010 which was diagnosed as a grumbling appendix and treated with antibiotics.

“However, the same pain returned in late July 2010 and he was admitted to hospital with a view to removing his appendix. A CT scan showed his appendix was fine, but x-rays showed fluid on his right lung. His lung was so heavy that doctors thought his stomach pains were caused by the weight of the lung putting pressure on his bowel.

“A litre and a half of fluid was drained off his lung and tested; this was where the cancer cells were found. He was diagnosed with stage 4 adenocarcinoma and given a prognosis of six months.

“It had spread to his ribs, his spine and his adrenal gland. He was devastated but determined to live as long as possible and beat the six months so he could avoid passing away around my 21st birthday.

“Dad found it difficult to understand how someone who’d run marathons and kept fit could be diagnosed with something so bad.

“It took him a few weeks to get his head around it and during that period he seemed particularly haunted and shocked. However, his character and personality were amazing, and he was determined to live longer than his prognosis. He was strong and defiant, living for 18 months before passing away on my 22nd birthday.

“Dad was a charming man, with a wonderfully grumpy edge! He was the kind of man who’d rather catch a wasp to put it outside rather than kill it; dad loved all living creatures. He had a passion for fishing and reading and could spend hours sitting on the bank by a lake with a fishing rod in the water, enjoying nature at its best.

“When we told people that he had lung cancer, he would often get asked, ‘how many cigarettes does he smoke a day?’, or they would say, ‘I didn’t realise Bob was a smoker’. We always stress that dad was a non-smoker to emphasise the fact that this can happen to anyone, regardless of their smoking status.

“My happiest memories with my dad involved playing video games or watching sport. He got me involved with fitness and weight training for the first time – a passion which I have continued as a hobby and in my career at Public Health England.

“On 22nd February 2020, my fundraising challenge will begin. I will be taking on a 24-hour Rowathon.

“The challenge will be at the volunteer-run Abbey Theatre in St Albans, for whom I’ll also be raising funds. As well as my ‘day job’, I have an acting career with the Company of Ten theatre group there. Being involved in theatre is a great way to prevent and manage mental ill-health, and it creates a space for social connection.

“Dad was proud of my acting career and ignited my love for sports and fitness; it seems fitting that I’m undertaking this demanding fitness challenge and that my theatre is hosting it for me.

“I’m excited for the challenge. I am a passionate believer in raising awareness of lung cancer and I’m excited to give something back for my 30th birthday.

“Dad and I now share a unique day together and I’m determined to complete the mammoth time and distance to raise as much money as possible. I have been training up to six days a week alongside my work and acting commitments, with a lot of my training rows equaling six hours on the rowing machine.

“Nothing could ever prepare you for such a challenge, but I have done everything possible, and I am raring to go.”

Matt’s challenge begins on 22nd February, you can read more about the event here

Like Matt, you too can turn anything you love doing into a brilliant fundraising idea. For help and even more inspiration, email community@roycastle.org or call 0333 323 7200 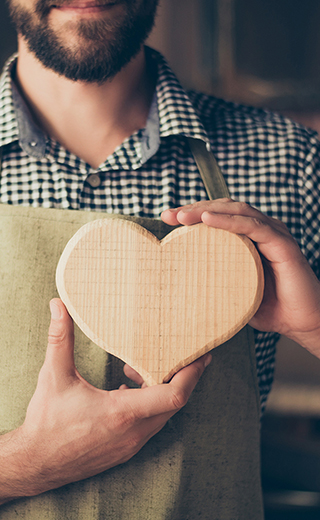 Love what you do. Love fundraising

Did you know that you can turn anything you love doing into a brilliant fundraising idea?