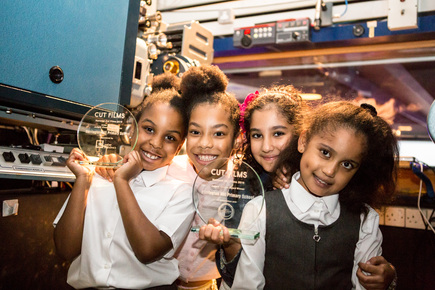 Over the past year, Cut Films has worked in Liverpool, Buckinghamshire, Harrow, Barnet, Hackney and a series of workshops across the country funded by the British Thoracic Society engaging over 3500 young people, delivering over 385 workshops, and receiving over 420 films.

Each year we hold annual film competitions, both in local areas and nationally. The films are then judged by an panel of experts and young people. These are followed by local awards in each location and the Nationals are held at BAFTA HQ in central London.

We are delighted to announce the winners of the overall 2016 National Cut Films Awards were ‘Harrington Hill Primary School’ with their film ‘Intelligent Life’, which can be seen below. The winners each recieved an iPad Mini and an award to take back to their primary school.

The 1st place winners of the other categories were:

Cut Films Judges Choice Awards (Ages 20-25)
‘Then Why Are We Here?’ by No Excuse Slovenia