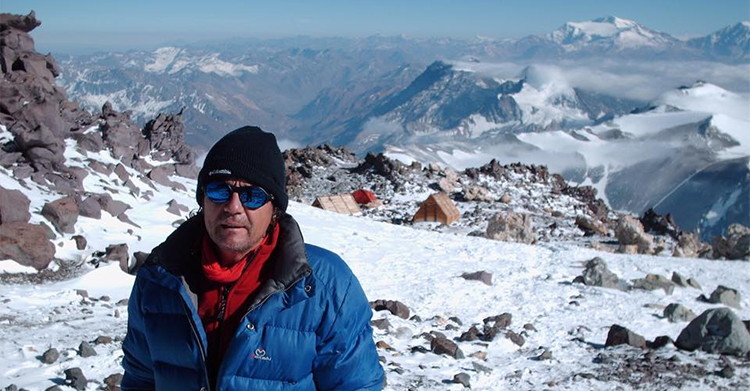 A little over 14 years ago, Peter Czanyo’s life turned upside down – forever. He was then 47 years old and the proud father of two young daughters; Carolina, who was 14, and eight-year-old Sofia.

Back then, Peter was a heavy smoker with a sedentary lifestyle. He didn’t feel ill, but he went to the doctor to see about a fatty lump that had appeared on his back.

That was his lucky break.

Thanks to the keen eye of his doctor, and following several tests, Peter was diagnosed with lung cancer. Ten days later, surgeons operated to remove the tumour, removing the upper lobe of his left lung, and leaving him with 60% of his full lung capacity.

Peter knows he owes his life to the prompt action of his family doctor in spotting symptoms that required investigation, and to the medical teams who carried out those vital tests.

Early detection is the key to saving lives: it’s the closest thing we have to a ‘magic bullet’ for lung cancer.

As with so many patients, Peter quickly realised that his life – and his priorities – had changed completely. In his own words, “my diagnosis was, without doubt, like a re-birth for me. My life since then has been very different.”

He decided to share his experiences and hard-won knowledge to help others.

Now, he’s president of the Fundacion Pacientes de Cancer de Pulmon (FPCP or the Foundation for Lung Cancer Patients in Argentina), one of the patient advocacy organisations within the Global Lung Cancer Coalition (GLCC). Roy Castle Lung Cancer Foundation is also a member of the GLCC; our Medical Director, Dr Jesme Fox, is its Secretary and the Foundation supports its work worldwide.

As well as his role with FPCP, Peter is an ambassador for Patient Power, a global network devoted to helping cancer patients and their families to become well-informed and to access the best possible medical care.

Following his operation, Peter, who lives in Argentina’s capital city, Buenos Aires, made considerable changes to his life-style. He began to improve his diet, take more exercise and go out running; in fact, he really got the running ‘bug’.

To date, he’s run two marathons; Berlin in 2015 and Chicago in 2016, and is preparing to run another in New York. In addition to sport he practices meditation.

My experience has taught me that patients can do more than just dream of a better life. We should not, must not, remain passive and accept our fate. What is even more difficult than overcoming cancer is overcoming the fear of it – but you can!

The moment that really transformed his ambitions came just eight months after his operation. While on road-trip with his sister and her brother-in-law to Mendoza, he stopped off to marvel at a spectacular view of Aconcagua Mountain. At 6,962 metres, this is the highest peak in the Americas.

There and then, Peter decided that one day he would climb to the summit, and his sister encouraged him to achieve this seemingly-impossible dream.

He explained, “My running, and especially my dream of climbing Aconcagua, has helped me to overcome the fear of cancer. I exchanged a nightmare – the fear of this disease – for a dream.

“My experience has taught me that patients can do more than just dream of a better life. We should not, must not, remain passive and accept our fate. What is even more difficult than overcoming cancer is overcoming the fear of it – but you can!”

In 2009, Peter made his first expedition to Aconcagua. He was forced to abandon the ascent when he was just 900 meters from the summit.

Ruefully, he recalls, “Two nights when the temperature fell to 30 degrees below zero and sheer fatigue made me decide to turn back.”

But the dream still lives – and on 16th February, he will be starting out once again to tackle the giant peak – this time, as part of a new expedition; one of a very special team of people who, thanks to sport, have overcome illness or other serious issues in their lives. They include a sprightly lady of 83, and a man who has lost both legs. To coin a well-known phrase: when the going gets tough, the tough get going.

He realises that for many, it seems a crazy challenge to tackle. As he says, “This mountain – it’s my dream and my madness! And the expedition is so close now.”

Peter has been given great support and motivation by his daughters. Their unswerving positivity has brought them all closer, and they share his love of sport.

His manifesto for life is straight to the point: “The aim of a cancer patient is to survive, but survival is not enough – you must live thoroughly. You should strive for more!”

He has recently been working with Patient Power on a project in which patients describe their experience of lung cancer to professionals within the pharmaceutical industry, the aim being to help them improve the overall patient experience.

Peter urges anyone who notices any of the signs and symptoms of lung disease to go to their doctor, and to insist on being checked out thoroughly.

He’s come a long way since the dark days after his initial diagnosis – and he won’t stop until he’s fulfilled his dream and he’s on top of the world. Literally. That’s dedication for you!

Take on your own challenge

If Peter’s story has inspired you, you can take on your own overseas adventure for Roy Castle Lung Cancer Foundation.

Check out our challenges