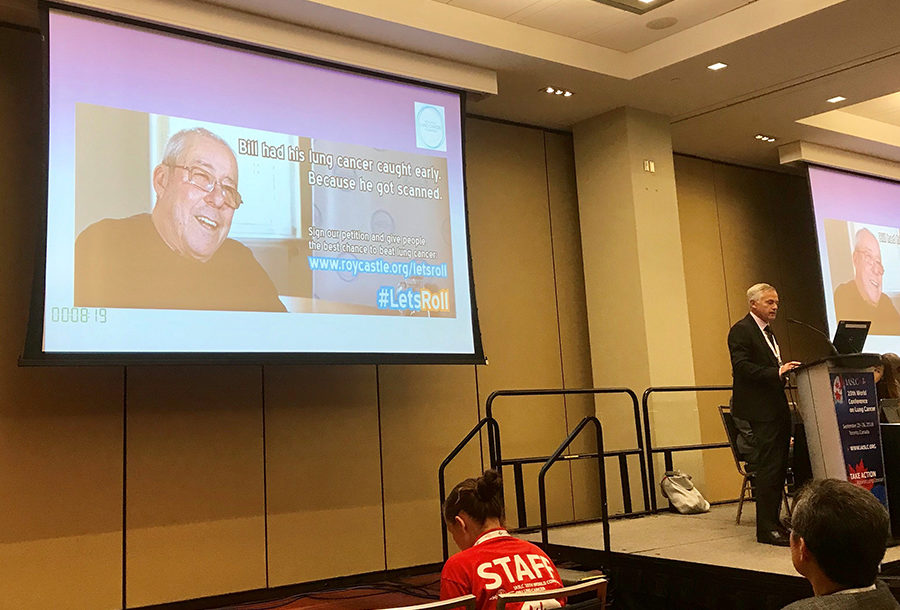 The UK’s only lung cancer charity, Roy Castle Lung Cancer Foundation, is calling for the National Screening Committee to approve the implementation of a national lung cancer screening programme after a new study has shown a 26% reduction of mortality from lung cancer with CT screening.

The long-awaited results from the NELSON study were announced yesterday [Tuesday 25th September 2018] at the 19th World Conference for Lung Cancer (WCLC) in Toronto. It reported a 26% reduction in lung cancer deaths when high-risk patients had a CT scan.

This is the biggest news lung cancer has had in years. We have been waiting for this result, but, we didn’t dare to dream it would be so positive.

We had previously seen data from the UKLS study in the US which showed a 20% reduction in mortality. The NELSON study surpasses this, reducing mortality by 26% with CT screening of high-risk patients. This means we could save the lives of one in every four people.

Funding its own project in Nottingham, it has witnessed first-hand how offering high-risk patients a LDCT scan can save lives.   Bill Simpson from Bulwell in Nottingham attended the charity’s lung health programme. He was diagnosed with early stage lung cancer in 2017.

“I had a call from a nurse, inviting me to the health check and I thought I might as well go.

At the initial appointment, I was told I needed a CT scan and then a PET scan. That was when I was told – you have lung cancer. However, it’s localised, it’s a very small amount and it hasn’t spread.

One minute you’ve been given a death sentence, the next you’re getting a reprieve and it comes out in two sentences.

You’re operated on and a couple of days later you can go home – you’re fixed, you’re mended, you feel great! That’s the big thing – if they find it, you can be fixed. People just need to be given the same chance as me.”

Bill’s story was shared by Professor David Baldwin at WCLC prior to the announcement.

“Our project,” Paula continues “along with other similar programmes around the UK and now the results from the NELSON study have all fed into the current climate which means change is going to have to come.

We have the proof that screening works. Do not deny people the chance to beat lung cancer.”